A round-up of the best precincts to eat, drink, shop, and entertain in Melbourne. So, the 'coolest' street in the world has been announced, and... (drumroll please) - it's Smith Street, Collingwood. This may be news to some but, with its vast range of food and dining options, funky bars, artisan outlets and vintage shops, it's easy to see why this once 'working class' area has become the number one must-see street on Time Out magazine's world hotlist.

The colourful streets of Melbourne, Australia

As you take in Melbourne's attractions, you'll soon discover the boundless allure, colour and atmosphere of its streets. From the bohemian chic of Brunswick Street to the exotic sights and smells of Victoria Street, each has its character and identity.

Situated right in the heart of the one-of-a-kind bohemian suburb of St Kilda, Acland Street and the Esplanade are sentimental favourites among locals and visitors alike. It is arguably the destination of choice that quintessential Melbourne Sunday experience. Typically, the day may go something like this – a brunch of bacon & eggs, a strong coffee, and a read of the Sunday Age at the Galleon Café, an institution among St Kilda locals.

After a leisurely walk down the end of St Kilda Pier to enjoy panoramic views of the Melbourne skyline and Port Phillip Bay, stroll back along the palm-lined Esplanade to Luna Park, one of the city's most enduring and colourful icons. This much-loved old fairground is modelled on New York's Coney Island, and the entrance is through a garish laughing clown's mouth. Nearby is the famous Sunday St Kilda Esplanade Market, where you can shop for custom-made jewellery, ceramic art or hand-made candles. Finish the day off with a pastry indulgence at one of Acland Street's famous cake shops or perhaps a refreshing beer at the Esplanade Hotel with great views over the bay.

What Is Melbourne Best Known For?

Melbourne is the cultural capital of Australia, known for its music, art centres and museums, and celebration and expression of art. It has been ranked, year after year, the most livable city, and it's not hard to see why.

What Is An Interesting Fact About Melbourne?

Melbourne was the capital of Australia from 1901-1927. The capital then shifted to Canberra, which remains the capital today. In 1850 during the Victoria Gold Rush, Melbourne became the richest and largest city globally. In 1906, the world's first-ever feature film was shot in Melbourne.

What's The Most Famous Street In The World?

Famous Streets Around the World to Explore

FAQs About Streets In Melbourne

Victoria Street epitomises the cultural diversity synonymous with Melbourne. The city's growing Vietnamese community has transformed what was once a nondescript traffic route into what could pass for a back street of Hanoi. The smell of steamed Peking duck and incense lies heavily in the air, alongside a bewildering jumble of Asian supermarkets, family-run grocery shops, fishmongers, fruit stalls and Chinese herbalist shops.

If you love Vietnamese food, then Victoria Street is the place to go. Restaurants like Tran Tran, La Lot, Thanh Thanh make this one of the best value eating streets in the city. One of the finest Vietnamese restaurants is the original Thy Thy. This is one place where it's fun to be on a budget – and the crowded factor makes this gem even more authentic. Best of all, the service is fast, it's BYO (bring your wine or beer), and there's a wide range of affordable dishes on the menu. Take a wander down Victoria Street, and you'll soon realise why this area has become known as 'Little Saigon.' 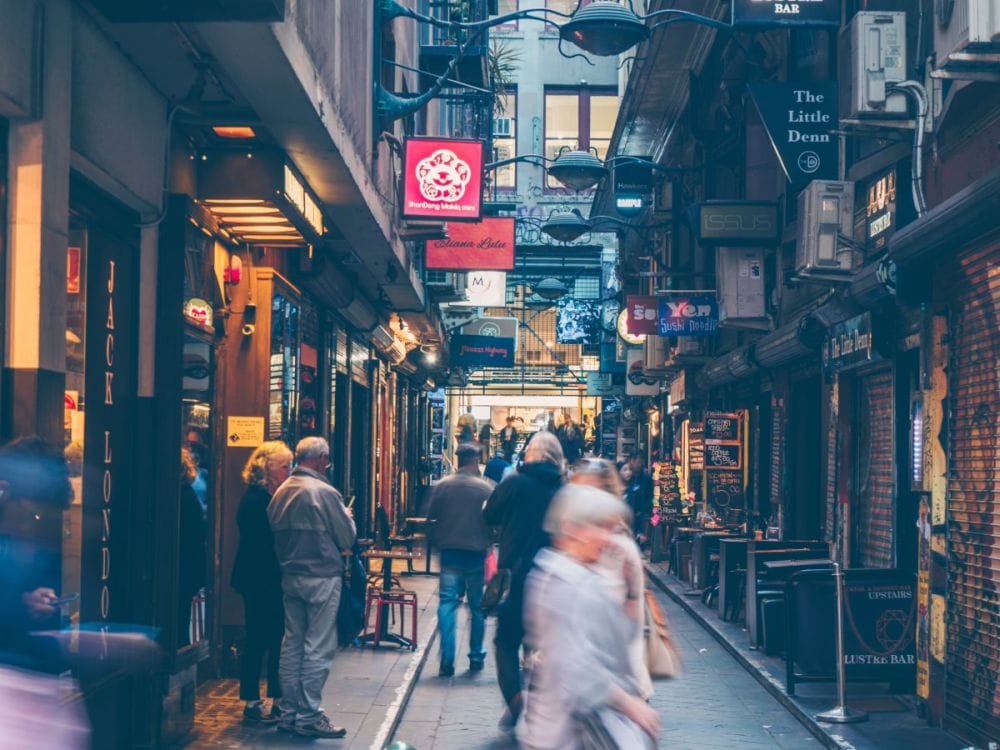 Formerly a blue-collar capital in the city's northern shadow, the suburb of Fitzroy and, in particular, Brunswick Street is where Melbourne's alternative side is in full force. This inner-city mecca for all things cool and kooky is awash with people from all walks of life; hippies, animal activists, tourists, yuppies, fiddle-playing punks and characters sporting amazing feats of body piercing.

Wander along Fitzroy's main drag, for tonnes of vintage clothing stores, second-hand bookshops, and take your pick from an array of bohemian cafés and restaurants, like the popular vegan and vegetarian spot the Vegie Bar or stop into the Everleigh for some of Melbourne's finest cocktails. The iconic Provincial Hotel at the junction of Johnson Street is a popular bar and meeting place for further explorations on a night out. A few doors away are Bar Open, a hip bar where local talents play late-night music and performances in a small but intimate atmosphere upstairs. Brunswick Street happens to be one of the best people-watching streets in the city. So firstly, make it an afternoon as the street can be lifeless any earlier, as the locals aren't early risers around here. Then, find an appropriate café such as Rustica, Brunswick Street Alimentari or Stagger Lee's and armed with a coffee, you can settle down to watch the drama unfold on one of Melbourne's most free-thinking streets.

If you had a dollar for every time Centre Place has been photographed by tourists, you'd be very rich indeed. Lined by hole-in-the-wall cafes, reminiscent of somewhere Continental such as Rome, this laneway offers a variety of food experiences topped with buskers and street art.

This sloping alley with rough bluestone paving stones is the epicentre of Melbourne's street art scene. There are always visitors huddled along here taking photos, as the walls are like a textbook featuring every sort of street art - tags, paste-ups, stencils and enormous colourful murals. The art is even more concentrated in connected Rutledge Lane, which wraps back to Hosier in a U-shape.

Why should Chinatown miss out on the Melbourne laneway fun? This narrow alleyway lined with old brick buildings has plenty of atmosphere by night. Entering Little Bourke Street, the first eatery is Rice Workshop, serving tasty Japanese street food. Further up is Gaylord, an old-school North Indian restaurant. However, the stars of Tattersalls are a string of Shanghai-style Chinese restaurants. The most popular of these is the Shanghai Dumpling House, outside which you'll often find queues. Finish the evening at Section 8, an open-air venue that serves the drinks from a converted shipping container. A classier choice upstairs is Ferdydurke, serving Russian-style dumplings and upmarket hot dogs, along with cocktails and nightly music from DJs. 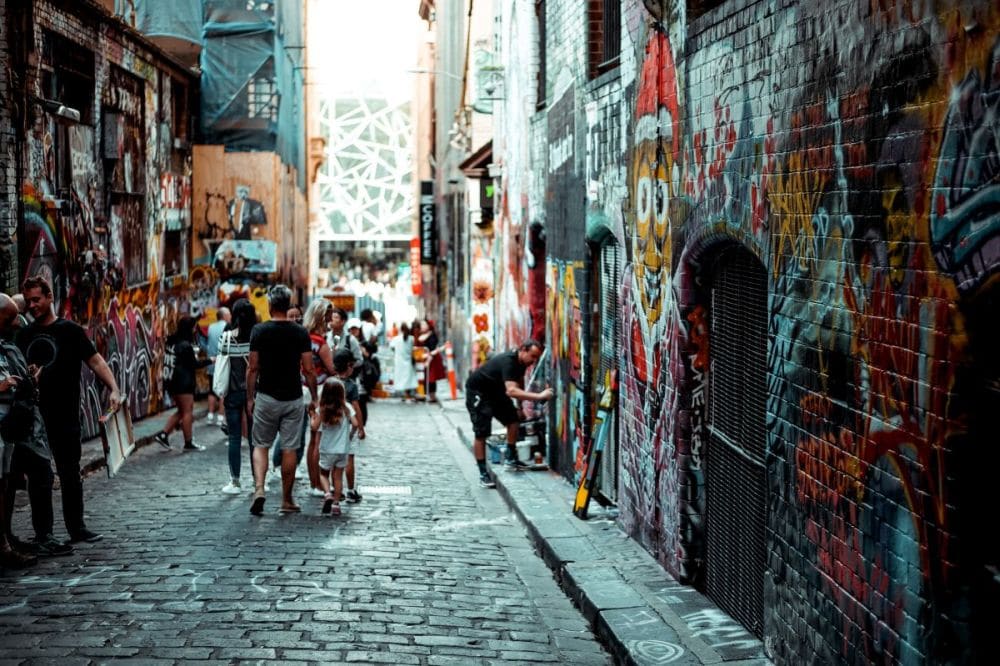 While small, don't forget to take a stroll off Brunswick St onto Gertrude St, featuring many independent retailers, bars, galleries, and restaurants to explore.

Stretching 22 kilometres, the Ballarat Avenue of Honour is the longest of its kind in Australia. More than 3700 trees represent the region's servicemen and women enlisted in the First Australian Imperial Forces for WWI.

Other Things To See & Do In Melbourne

But in a city like Melbourne, declaring one street as the 'coolest' might be a little contentious. So to even out the playing field, we've rounded up some other close contenders for must-see streets in one of the world's most liveable cities.